As the countries of this country outraging against NRC and CAA, Rahul Gandhi has finally revealed why he’s against NRC. His family had adopted the surname ‘Gandhi’ back then only for promoting themselves and their family business. It was a strategic move by Indira Priyadarshini to use her husband’s surname. The royal couple decided to use ‘Ghandi’ from Feroze ‘Ghandi’ and slightly change it to ‘Gandhi’, and now every Dick, Harry and Abdullah thinks they’re the direct descendants of Mohandas Karam Chand Gandhi.

But now things have changed since Baniyas taken over the country. “One Baniya family also slashed the Internet charges so that now everybody knows what my original name is” Rahul continues… “Yes, ‘Raul Vinci’ is my other name in case you are from Kashmir, and don’t have internet access to see Subramanyam Swami’s posts”.

Rahul’s family doesn’t feel safe in India anymore. His mom Sonia Maino also keep saying “Dhehrr Kah Mahholl haii” thanks to Ravish Kumar Bhai for that Hindi imposition. NRC is bad, we do not want to be de-ported to Italy, my sister Bianca also scared about this NRC thing. “Can you imagine what my poor brother-in-law Vadra ji going to do once we’re de-ported? Modi is breaking families with his NRC move”. Rahul is scared, If NRC comes in place then his family will have to provide their papers, which says they belong to Gandhi clan. But with little bit of back-checking anyone can find out they’re not real Gandhis.

I’m afraid, me and family are going back to Italy if the government find out the irregularities in their family tree surname.

Reporter: So, what are you going to do in Italy Rahul?
Rahul: Aloo se Sona.. Good no?
Reporter: Pehli fursat me Nikal… 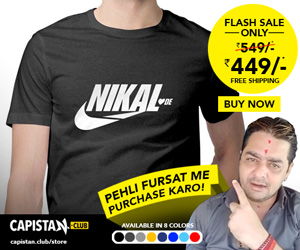